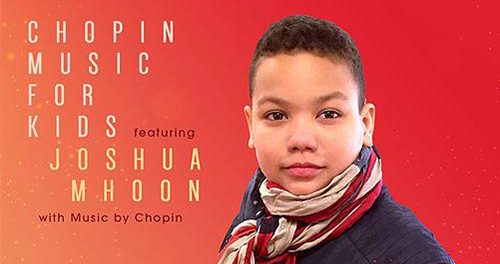 Joshua Mhoon discovered his gift for piano when he was nearly 8 years old when he went for his first music lesson at the Steckman Studio’s in Oak Park, IL. Dr. Harry Steckman took Joshua on as a piano student and when Joshua was playing “Minuet in G” by Bach within 15 minutes of Steckman teaching him his c-scales, he asked his parents how long Josh had been playing piano. His parents said “he’d never played the piano before” and Dr. Steckman chuckled and went into his studio to complete the lesson. Within a year, Dr. Steckman taught Josh classical, jazz, ragtime, popular and other music. Within 3 months of beginning his piano lessons, Joshua began winning competitions…1st place. Since that time, Joshua has won many awards, performed with orchestra’s, on television and radio, opened for legends and staged his own concert. Joshua is completing 8th grade at Quest Academy in Palatine, attends Merit Conservatory of Music, and is a MENSA member He loves sports, video games, movies, travel, acting and playing the stock market.

Joshua’s parents, Jun and Tahjma Mhoon, have a philosophy that ALL kids are gifted…it’s just about exploring and opening the kids up to different experiences and letting things unfold.

What’s next? In June, Joshua graduates from middle school, performs at the Young Steinway Concert in IL, other competitions. In July, he will be performing at the Amalfi Coast Music & Arts Festival in Italy for 2 weeks. Late summer, Joshua will begin his new High School adventure in Natick, MA at Walnut Hill School for the Arts and the New England Conservatory.

Joshua Mhoon made his orchestral debut at the age of nine playing an arrangement of Doctor Gradus ad Parnassum with the Chicago Sinfonietta Orchestra. Since then, Joshua has played many places around the world. He has played and performed in Germany, Ireland, England, Greece, Turkey, Italy, Austria and France. He has played at a wide range of venues from The Ravinia Festival in Chicago (3 times), to Festhalle Riegelsberg in Germany, to Musikverein in Vienna, Austria and Lincoln Center in New York.

PERFORMANCES
• In January 2017, Joshua performed three concerts in Saar Louis Germany and Metz France where he received 3 standing ovations at one of the larger performances.
• February 2017, Joshua performed with his Merit School of Music’s Chamber Music Group, The Firebirds, at Ravinia’s Gordon Hall. This performance marked Joshua’s third time he’s performed at Ravinia’s Gordon Hall.
• In December 2016, Joshua played a Beethoven-Bruno Mars Mashup during the Chicago Bulls Half Time show at the United Center delighting over 21,000 people.
• That same month he was featured performing a mashup of Hip-Hop and Liszt at the University of Chicago’s Logan Center for the Performing Arts at the SSOF Show.
• Mhoon has performed with Anthony McGill, Principal Clarinetist for the New York Philharmonic, at Merit School of Music’s 2016 Gala. In the summer of 2016, Joshua performed with Yo-Yo Ma at the 2016 Chicago Youth and Music Festival at Merit School of Music and he also assisted Yo-Yo Ma at Chicago Symphony Center the fall of 2015. His first orchestra day-view at 10 was with The Chicago Sinfonietta Orchestra. He also opened for legendary pianist Ramsey Lewis at the U I C Pavilion at age 11.

The summer of 2016 Joshua attended Interlochen Music Camp for Advanced Piano. In November, 2015, Joshua was one of ten young pianists out of 400 kids, from 64 countries – and one of just two from the United States – to be selected to study with internationally renowned teachers and participate in a master classes with concert pianist Lang Lang at The Allianz Junior Music Camp in Vienna, Austria.
In 2014, Joshua attended Blue Lake Music Camp also in Michigan.

Joshua currently takes private lessons with Brenda Huang and has previously studied with Mio-Isoda Hagle (Juilliard Pre-College Alumni), Alexander Djordjevic from the Music Institute of Chicago, and had his first lessons with Dr. Harry Steckman at the Steckman School of Music. Aside from Private Lessons, he studied duet performance with Claire and Ralph Neiweem (Juilliard School Alumni), and he studied chamber music with two-time GRAMMY nominees, The Lincoln Trio.
Joshua is a Mensa Member and his favorite pianists are Valentina Lisitsa, Lang Lang, Evgeny Kissin and Vladimir Horowitz. Joshua also enjoys many genres of music and has performed Mash-Ups of Classical and Contemporary Artists.